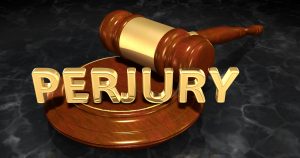 The U.S. criminal justice system functions at its best when all participants act in good faith.  We’ve all seen TV shows where witnesses testifying in court swear to “tell the truth, the whole truth, and nothing but the truth.” But what happens when police or prosecutors lie under oath? Though rare, it does happen with alarming frequency. How can it affect your case, and what can you do to combat it? Let’s take a look.

In legal terms, “perjury” occurs when someone knowingly makes false statements (verbally or in writing) while under oath. Both defendants and prosecutors can be guilty of perjury, but misconduct by either the prosecutor or police officers testifying for the prosecution can have very serious consequences. For example, back in the late 1990s, more than 70 members of the “CRASH” anti-gang task force in Los Angeles were found to have lied to boost gang convictions. And in Philadelphia, 10 drug task force officers were found to have falsified evidence and to have robbed suspects of both cash and drugs. In each case, many convictions had to be thrown out, and law enforcement suffered a decrease in credibility.

Why Do Cops and DA’s Lie?

Both the police and the District Attorney are under a great deal of pressure to make arrests and gain successful convictions. Failure to do so, especially in high-profile situations, can lead to public pressure and a generally negative view of law enforcement as ineffective or incompetent. And although officers, detectives, and prosecutors are strongly encouraged to perform their duties in good faith, there are many cases where they have been shown to venture outside the bounds of the law to gain a conviction. In other cases, the police or prosecutor may believe they are being truthful but in fact, possess such bias against a defendant that impartial testimony is impossible. Other times, an officer will rely on his or her badge for credibility, claiming that the defendant is untrustworthy simply because they are a defendant.

Prosecutorial misconduct isn’t new—and there are even protections embedded within the law to protect defendants from it. One of the most important of these is the “Brady Rule,” which simply states that prosecutors must share any relevant exculpatory evidence with the defense. The Brady Rule originates from a 1963 case in which a man was charged and convicted of a murder to which another person had already confessed. The prosecutors in the case were aware of the second man’s confession, but chose to conceal it and proceed against Brady. The Brady Rule makes it more difficult for corrupt or lazy prosecutors to pursue charges they know to be false.

What Can You Do?

If you feel that either the prosecutor or the police have lied under oath, you must work through the system to make your case. Inform your lawyer immediately if you feel your case has been subject to police or prosecutorial misconduct. Your attorney may be able to use cross-examination to identify inconsistencies or falsehoods in the prosecution’s argument. Your attorney can also introduce evidence that directly contradicts any false testimony. If you have already been convicted and feel that prosecutors or police lied to make their case, you can petition for a retrial, though this can be a prolonged and difficult process. Again, your attorney is your best ally when deciding to challenge prosecutorial misconduct.

At Bond James Bond, we understand that the legal system can be challenging and confusing. Our trustworthy and seasoned bond agents assist clients every day, helping them make bail and secure pretrial release, while also ensuring that defendants meet all court-mandated appearances. Don’t let yourself or a loved one languish in jail while awaiting trial. Contact Bond James Bond today!