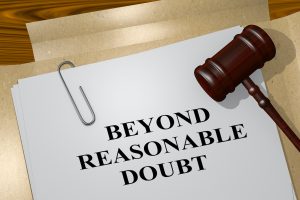 If you’ve ever encountered the criminal justice system, watched the news, or seen a crime drama on TV, you’ve probably heard the term “beyond a reasonable doubt.” But what these words mean and how are they applied in a legal setting may not be immediately clear. It’s worth a moment to examine the origins of “reasonable doubt” and see how the term applies to actual cases.

In the United States criminal justice system, a criminal defendant is considered innocent until proven guilty. The idea behind this principle is that it is far worse to convict and imprison an innocent person than to let a guilty person walk free. So the State (represented by the District Attorney’s office) must therefore produce evidence proving that a defendant is guilty in order to establish grounds for conviction. The U.S. Supreme Court first referred to “reasonable doubt” in the 1880 case of Miles vs. United States. Here, the court ruled that,

"The evidence upon which a jury is justified in returning a verdict of guilty must be sufficient to produce a conviction of guilt, to the exclusion of all reasonable doubt."

Where is “Reasonable Doubt” Applied?

Under United States law, “reasonable doubt” as a standard of proof applies only in criminal cases (whether adjudicated by a judge or jury). In civil cases, a different standard of proof called a “balance of probabilities” is used, in which one party must prove that their account of events is more likely true than not. This sets a lower bar for proof than does the criminal standard.

How Is “Reasonable Doubt” Applied?

If you are arrested and charged with a crime, you are encouraged to hire an attorney. If bail is set, you may need the assistance of a reliable bail bondsman. If you lack the financial resources to engage counsel, a public defender will be appointed to represent you. Your attorney will attempt to refute the prosecution’s case against you. This may be accomplished in several ways, one of which is to create doubt about the prosecution’s account of events. For example, your attorney may attempt to show you were elsewhere at the time the crime was committed or to show that another individual had the motive and opportunity to commit the crime. A plausible alternative scenario of the crime provided by the defense can generate enough reasonable doubt to result in an acquittal.

How “Reasonable Doubt” Can Make or Break a Case

Juries must consider “reasonable doubt” when making their determination of guilt or innocence. A high-profile example is the 1994 murder case brought against former football great O.J. Simpson, accused of killing his wife and her companion in the couple’s Brentwood, California home. During the trial, the defense team instructed O.J. to put on a bloody glove recovered from the crime scene to show the jury that it did not fit Simpson. Though widely regarded as a stunt, the tactic did create doubt about Simpson’s guilt in the minds of the jurors and is considered a critical element in his subsequent acquittal.

At Bond James Bond, our clients’ pretrial release is our first priority. We are committed to helping each client to meet the terms of bail so they can continue to work and spend time with family pending trial. Our experienced bond agents are ready to guide you through the bail process and to help ensure that you make all court dates. Have you or a loved one been arrested? Discover how Bond James Bond can be your best ally. Contact us today!