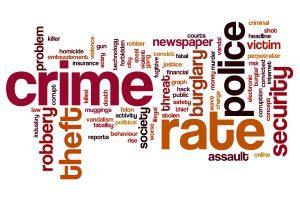 The Georgia Bureau of Investigation compiles annual crime statistics using a method based on the FBI’s national reporting system. This database focuses on serious felonies and the rates of arrest and conviction for each. Let's look at the most recent report (Editor’s Note: Data for 2018 had not been compiled at the time of this writing).

The 2017 Summary Report of the Uniform Crime Reporting (UCR) Program tracked data for a range of felonies, including murder, non-negligent manslaughter, rape, robbery, aggravated assault, burglary, larceny-theft, motor vehicle theft, and arson (these are the eight crimes which the FBI combines to produce its annual crime index). The data for these offenses are shown below:

Robbery rates were highest in Fulton (2354 robberies), DeKalb (1535 robberies), and Gwinnett County (803 robberies). These rates also represent highs for the state of Georgia.

When compared with 2016 data, statewide rates for some violent crimes increased in 2017:

While for other index crimes, rates saw decreases:

And rates for others remained steady:

If these numbers seem high, there is a bright side. Crime reduction continues to be a high priority in both the Georgia State House and Governor’s Mansion.

Remember that if you’re arrested and charged with a crime, an experienced and licensed bail bondsman is your best ally. At Bond James Bond, we pride ourselves on our professionalism, courtesy, and attention to detail.  Don’t miss valuable time away from work and family. Contact us and discover what Bond James Bond can do for you.